Boundaries are evaporating between the physical and the virtual. We shape human experience with design — across all media — and our work has never yielded more rewards. We earn our deepest satisfaction by getting to the heart of the matter. What is the heart of an experience? What matters to people who seek engagement? We find the answers.


We create immersive experiences designed to engage, inform, educate, delight, and create an exchange of value between giver and receiver.

Samples of our work 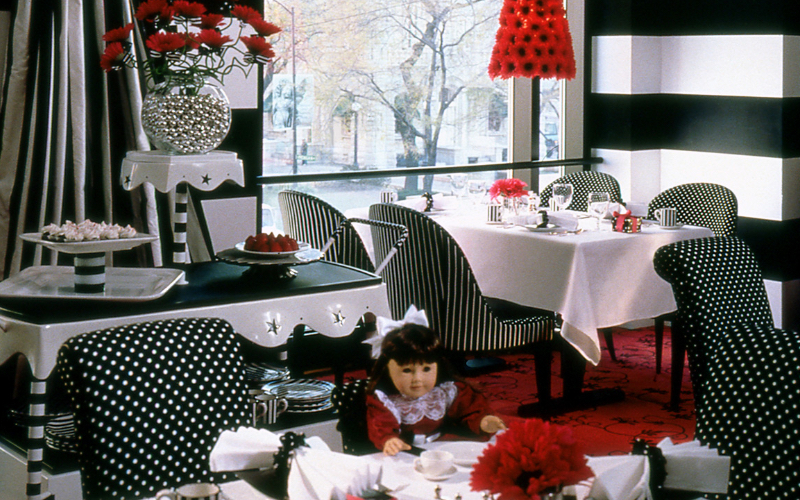 American Girl transformed itself from a catalogue company worshipped by young girls into a retail powerhouse with the invention of Chicago’s first American Girl Place by Pleasant Rowland, AG’s founder and the DG team. A totally immersive experience, it offered a theatrical performance, museum quality vignettes of its characters’ homes, a luncheon designed to delight, the full offer of books, dolls yesterday and today, and all of the trimmings, including a dolly hair salon and clothes to twin girls and their dolls. We designed a half-day for a girl to share with a doll companion and a beloved adult, with all the touches to be a most memorable day. 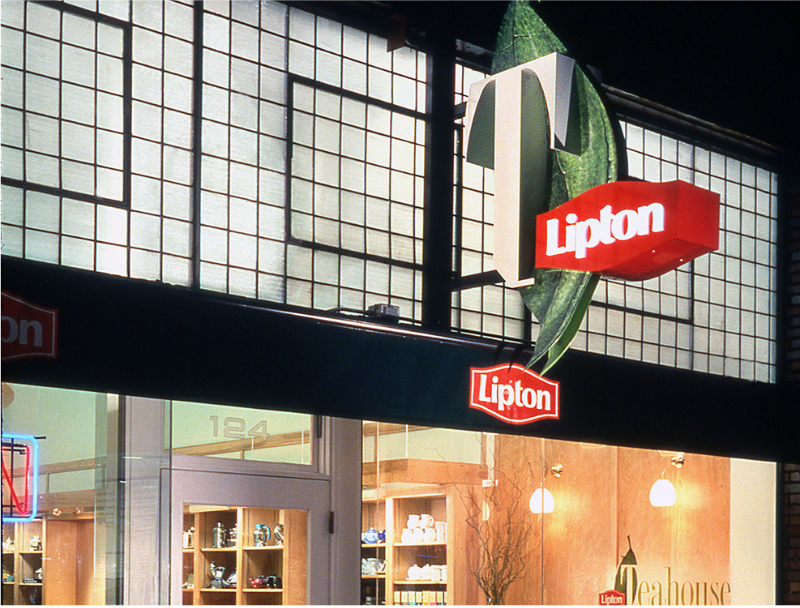 More than the most popular tea in America, Lipton is a brand that takes tea very seriously, from growing to curing to delivering taste and quality. Lipton Tea Shop was invented to deliver a high quality branded tea experience which would delight its customers while teaching them about this ubiquitous hot drink shared by so many cultures and the company that became synonymous with tea in America. 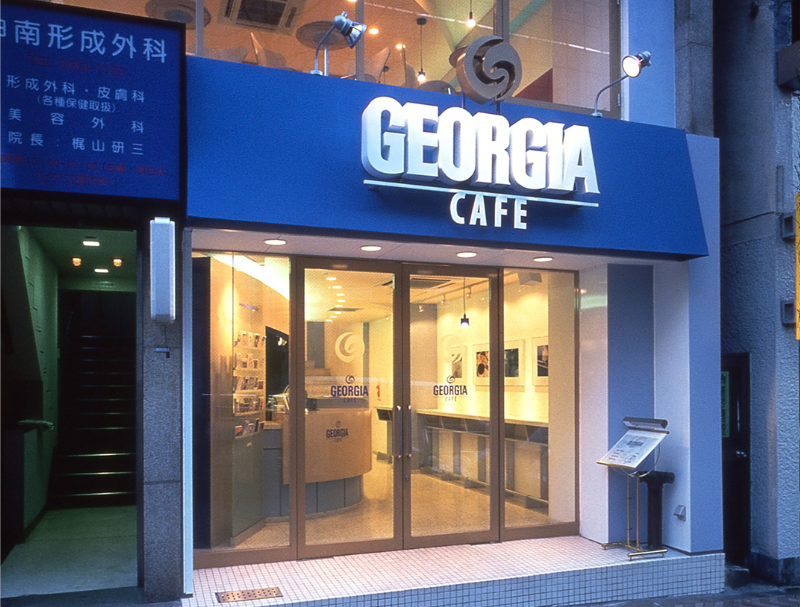 The most popular canned coffee in Japan, this coffee division of Coca Cola asked for a brand experience that delivered a work break timeout and a high end social experience to its Japanese customers. This new offer was designed to arrive in advance of the first Starbucks destination in Japan. 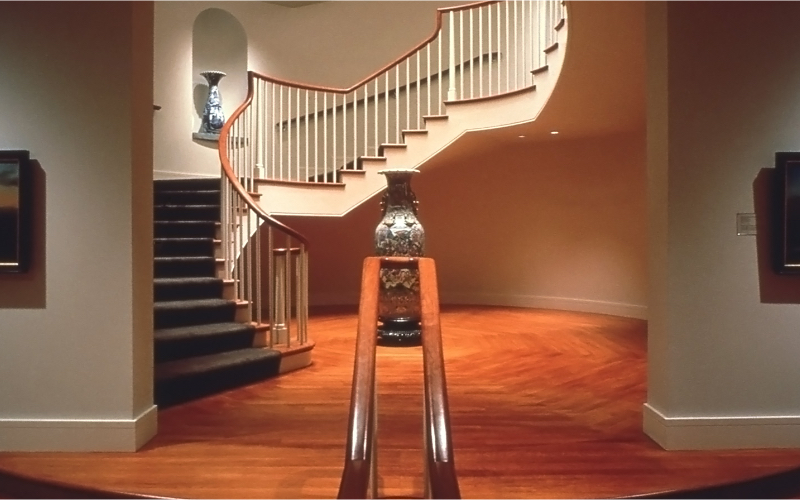 The oldest museum in America in continuous operation, this famed Asian export collection documented the early days of America and its adventurous acquisition of global cultural objects. Its expansion offered the chance to tell the story of its illustrious evolution and the history represented by its treasures. 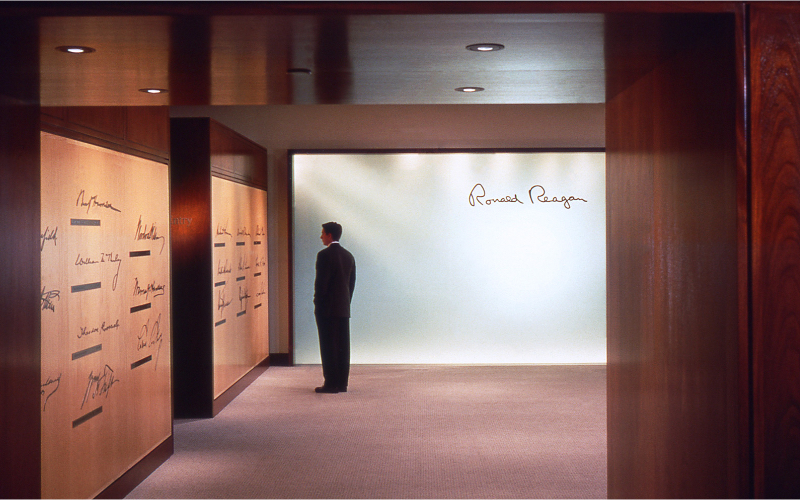 DG was privileged to write and design the story of the Reagan Presidency with President and Mrs. Reagan, tackling the important narrative of his life and times. Showcased within its 33,000 square feet were re-creations, artifacts, video and interactive technology speaking to the passion this President felt for the American values of freedom and independence, leading dramatically to the fall of the Berlin Wall. 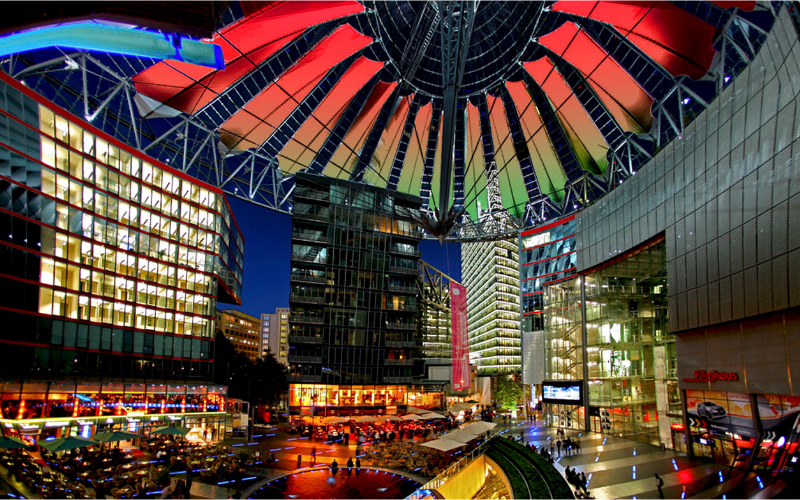 From the big idea DG created and presented to Peter Guber and Mickey Schuloff as a destination experience, to the real estate location chosen next to San Francisco’s Yerba Buena Gardens, this three-year process took many unexpected twists and turns as the experience was shaped to fit its container and the SONY corporate strategy was articulated to its brands to present itself as an entertainment powerhouse. Several years later, DG employed the core principles of audience engagement and activated urban space into the grand public spaces in SONY’s newly designed corporate headquarters in Potsdammer Platz, Berlin, Germany. 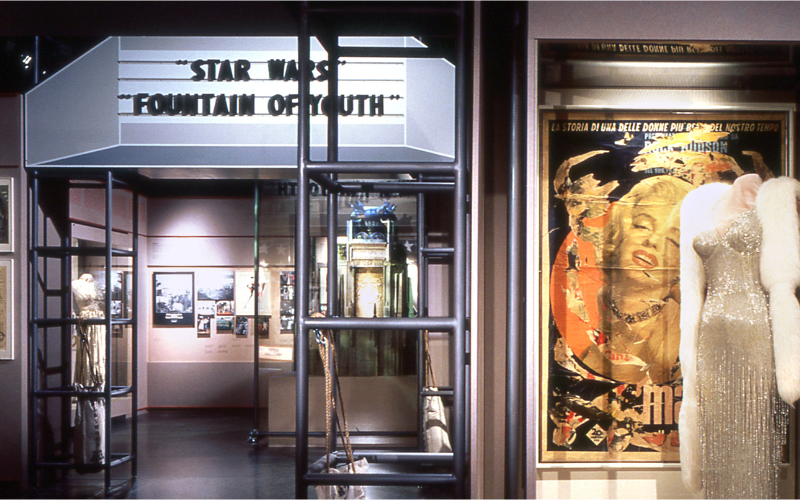 A traveling exhibition premiering at the Smithsonian Institution’s American Museum of Natural History, in Washington D.C., this part of the Smithsonian Institution’s Traveling Exhibitions (SITES) program delighted audiences in X cities over Y years. The exhibition contained some of the most important moments and artifacts in Hollywood lore and legend, chock full of information, fun and intrigue. 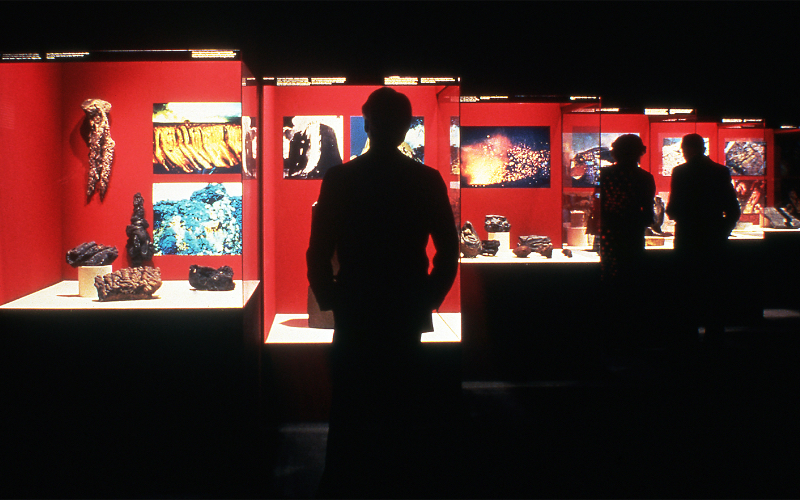 NYC’s American Museum of Natural History fielded a modest exhibition that packed a punch. Accompanying a major presentation on Pompeii, ‘Volcano’ delivered the drama in an exposition on the natural phenomenon of volcanic eruption through a sound extravaganze of rumble and soundwaves. This appendix to the big show informed through storytelling and making the overwhelming power of nature a true sensory experience.

Bacteria that can kill became the lead actors in a week-long knock-your-socks-off, get-your-attention, drive-you-to-learn-more-about-the-‘bugs’ drama which started on the sidewalk and crescendoed at an animated video wall. At the end of the journey, after following the video trail, the wall illuminated antibiotic resistance and The Medicines Company’s commitment to infectious disease with its new and innovative addition to the armamentarium of treatment. 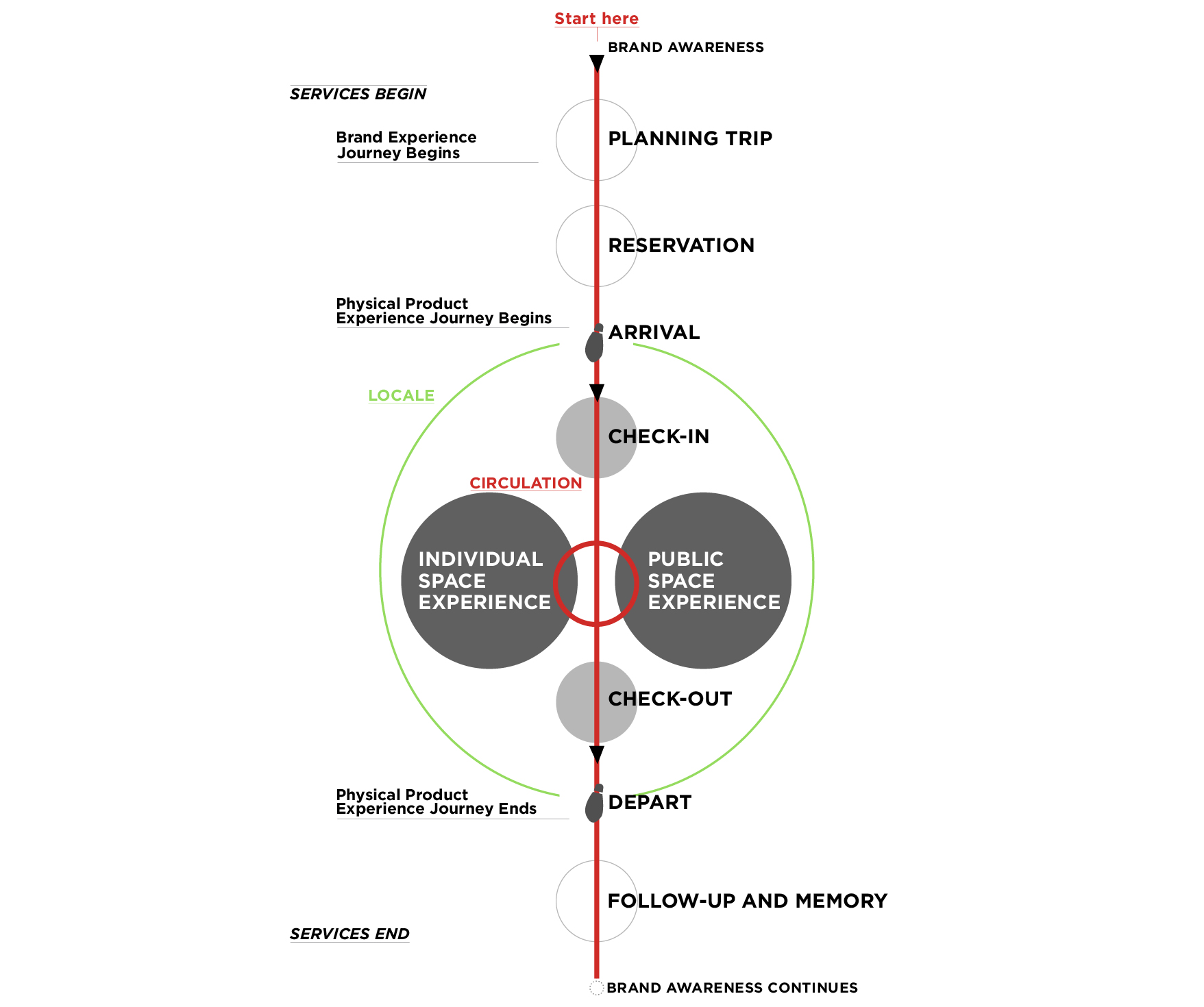 Redefining what an iconic brand with a loyal customer base can be to those who love it and those who might not know it yet, DG defined the ‘brand experience journey’ as a way to understand, research, reshape and redesign a new Courtyard by Marriott model. This idea of an ‘experience journey,’ subsequently carried by DG to P&G, become a holistic way of understanding consumer experience and a methodology for understanding and designing that we still employ 20 years later. 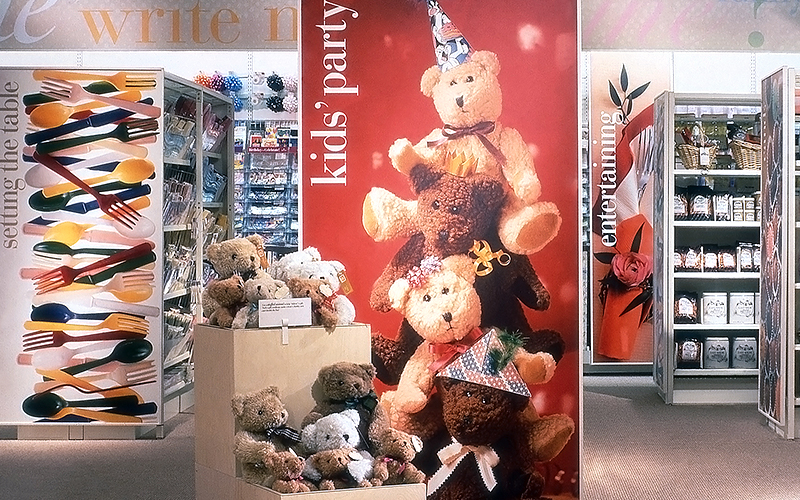 What if Hallmark, the master storyteller, took storytelling to retail? In 1996, DG was asked to create a new concept store for Hallmark and that is what it became – an immersive destination for stories and experiences which helped its customers express themselves to those who mattered to them. 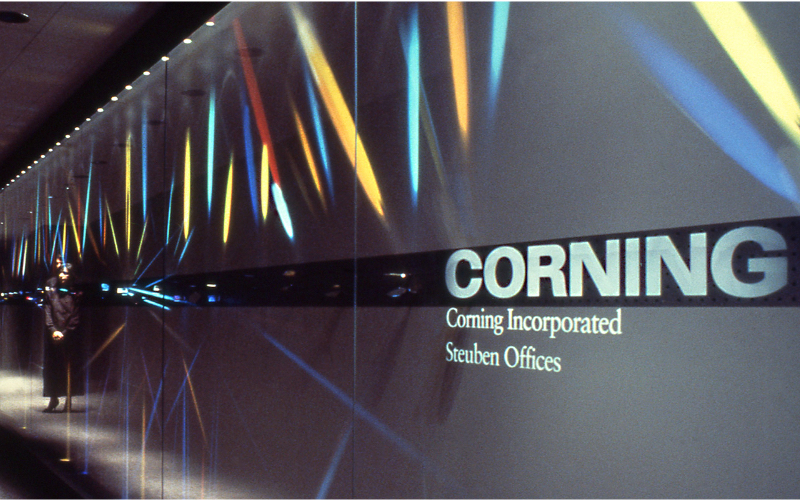 The inventor of glass technology and beautiful objects in glass (Steuben) puts its prowess on display. These technologically advanced materials – dichroic filters – became an immersive, gently-shifting sculpture in glass and light gracing its corporate NY offices a few floors above the iconic Steuben Fifth Avenue store. 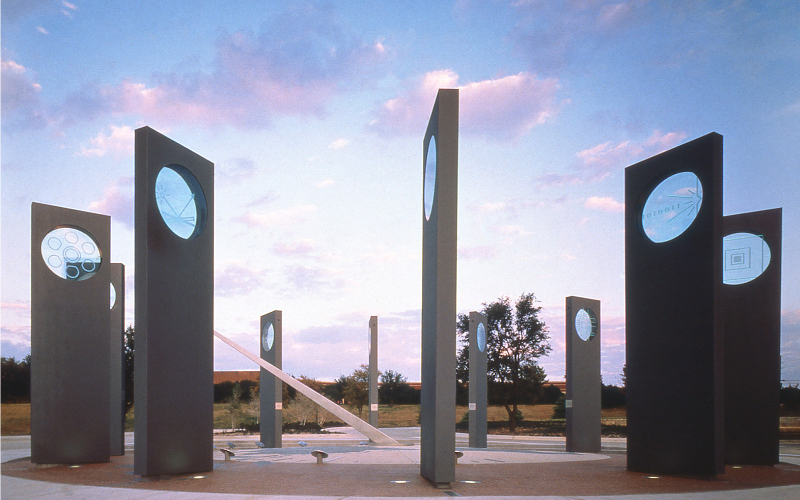 Creating a metaphor that became a landmark, defining a sense of place, telling the story of an enterprise and shaping a narrative its leadership and its people could rally around: that is the famed Texas Instruments sundial at its Plano, Texas headquarters. Designed by Michael Donovan, this interpretation of the oldest time telling technology represents TI’s technologically advanced innovation around the world, 24/7. 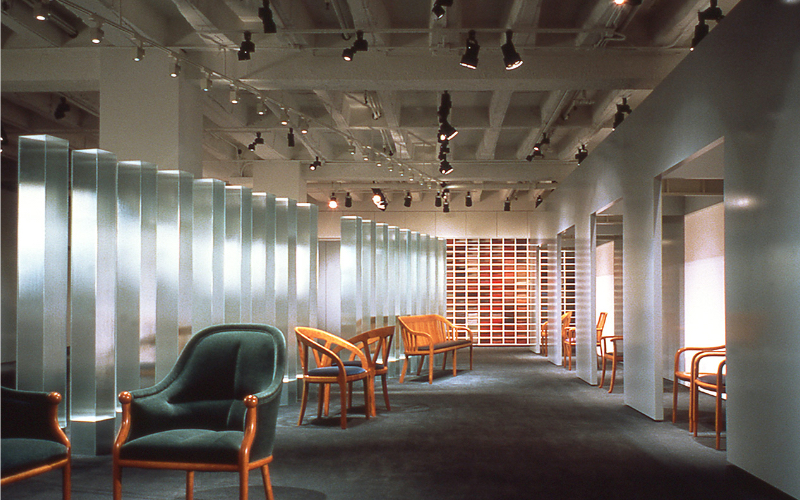 Everything Ward Bennett designed was engineered around the human body: from its dimensions to the desire to live with beautiful objects and to put a sensuous hand to materials soft to hard. Iconic images were experiential – spaces were painted with light and, even when temporary, attained a sense of timelessness. 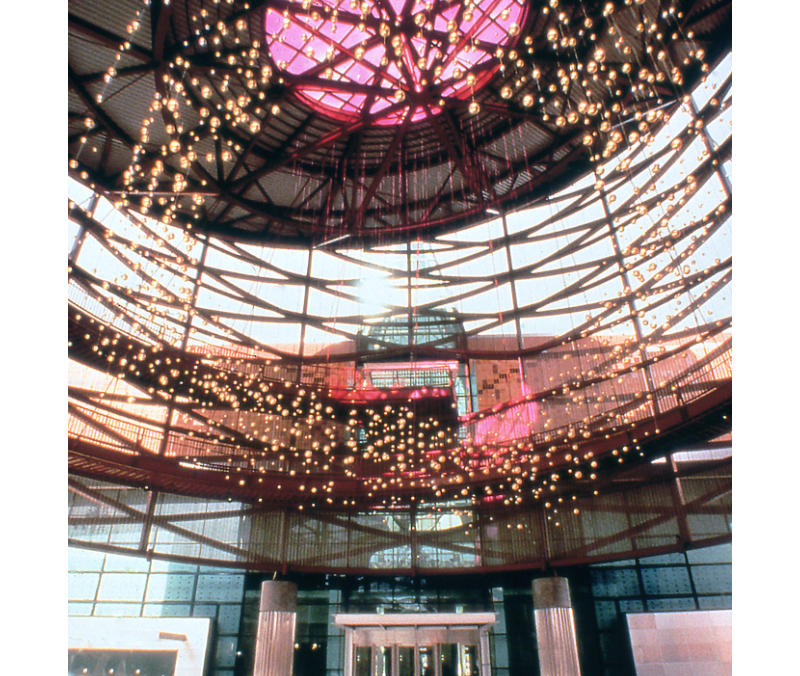 Previously the California Museum of Science and Technology in Exposition Park in South Central LA, a grand new building designed to welcome its neighbors from dozens of diverse cultures to claim the building as their own. DG worked with ZGF Architects to shape the public spaces approaching and threading through the building – from a skateboard-friendly exterior front yard, to grand thoroughfares where art and science encouraged engagement and community. 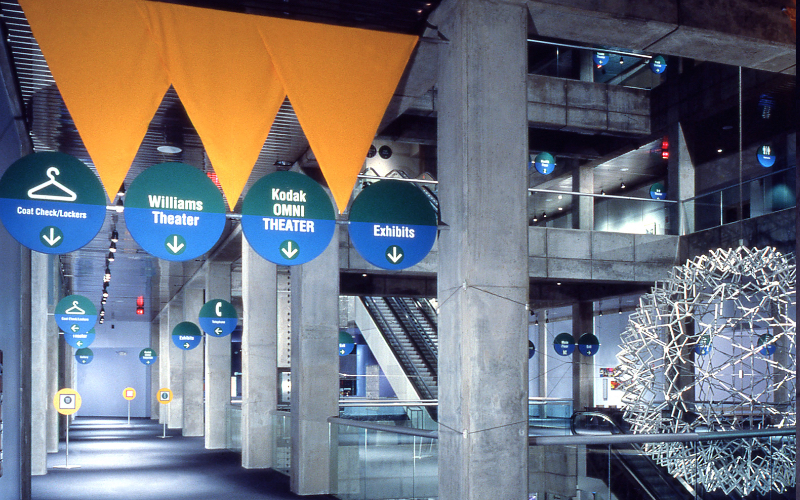 Only an idea when DG began, this new science museum was born to be a regional destination for education, exploration and immersion into science in the broadest sense. Location was key and changeability critical. DG adorned the modernist concrete shell with colorful and playful wayfinding, created exhibition standards that invited diversity and offered a view to the world that was at once colorful, joyful and substantial. 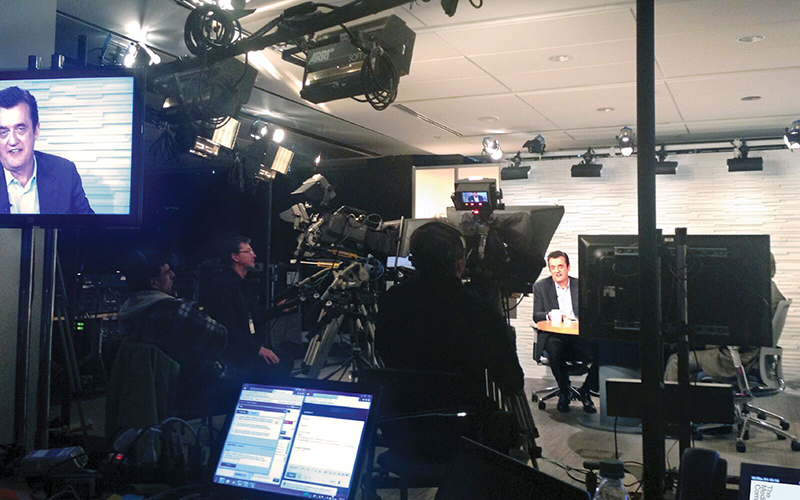 A philosophy. A program. A change initiative. The creation of a evolved culture that included everyone. For three years The Medicines Company lead by its CEO and Nancye Green, created and produced events in varying formats - two days, one day, one-half day - which engaged every one of MDCO’s 600+ employees around the world via a telecast from its headquarters in Parsippany, NJ. Sharing ideas, giving face to triumphs and voice to disappointments, providing a forum for getting on the same page and exploring differences, ‘Lead with Purpose’ put leadership on stage and invited everyone into new ways of working and interacting and the opportunity to solidify vision, principles and policies.