Can design thinking reveal the intrinsic value of blockchain?

My mind keeps reverting to fourth or fifth grade when personal computers became a reality. Fantastic, colorful sci-fi visions of the future ran through my mind. However, the magic carpet ride ended upon entering our computer lab, where all I could see was a black screen, some illegible gibberish, and a blinking line, prompting further anxiety.

After that day, I was uninterested in ever walking back into the computer lab until many years later, in high school. I heard a buzz in the back of the library and study halls about “windows” in the computer lab. I puzzled over how the school would put windows in a room surrounded by other rooms; so, I went to check it out. However, when I got there, it was full of people playing on bright, colorful computer screens, with nary a window in sight. Of course, I was looking at the wrong thing: the windows were views into intellectual journeys my peers were taking, aided by Microsoft’s offering.

Over the next ten years, computers held my hand every time I needed a dictionary, encyclopedia, photo/video filing eternity, word processor, or a math whiz. Little did I know there was so much more at my fingertips. Everything I interacted with was evolving to a level of connectivity and intuition I never believed would happen in my lifetime. iPod, iPhone, iMacs, MacBook Pros and a ravenously growing library of apps have become so ingrained in our lives that many of my colleagues don’t have a memory of life before it.

Last night after work a few of my younger colleagues and I stayed and talked for a bit, and I mentioned that I was writing about blockchain. I told them about how I’m reminded of when everyone had to know MS-DOS to use computers in the beginning. As I spoke, they looked at me in confusion and asked to be reminded what MS-DOS was. I was dumbstruck. My best analogy was useless because technology has advanced so rapidly that history isn’t even common knowledge.

I woke up today thinking that blockchain will ignite just as quickly and I want to help it happen.

The developers and engineers who have been diligently building this ground-breaking platform for a secure data ledger have now reached the point where they need the expertise of communication designers to help them reveal the magic of this technology to those for whom it would serve. This is where I want to put my skills to use. Every day we work to provide the best, clearest way to communicate the value of our clients and their products, to the audiences they seek to reach. We don’t have to explain the soup to nuts of blockchain for people to trust the technology and benefit from using it in the same way we are comfortable driving a car down the highway at 70 MPH even though most don’t know exactly how the car slows down when we press the brake pedal. But we do have to make it understandable in the context of our world, for its potential impact and significance to be realized. We are being presented with an opportunity to cultivate an identity for a tool which will soon be as common as the internet you are using to read this blog post.

While cryptocurrencies are all the buzz these days, the technology supporting them is the real news of this generation. Right now, as I’m typing, innovators are creating blockchain contracts which will make it possible for my smart refrigerator to notice I am out of my child’s favorite lunchbox snack, then place a request for more of it—which is within my budgeted amount for school lunches this week—to merchants near my home. When a merchant chooses to fulfill the request, my drone flies off to pick it up and deliver it home —all before I return from work.

Imagine a future where our identities are secured and owned by us instead of the virtual self that is collected by social media conglomerates. We could then harvest the trail of breadcrumbs—we are currently giving away for free—then rent out the data ourselves and monetize it. Imagine renting out your health data under a smart contract that allows companies to use the information in a way both of you have agreed to for a set period, and that will enable you to make money by granting access. Blockchain smart contracts will make it possible for people to control the use of their own personal data, and decide when and how to benefit from its worth. 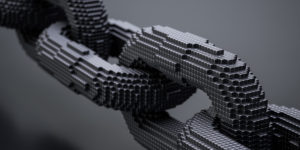 With smart contracts we can send money directly from person to person, ensuring a secure chain of custody, without a single intermediary to complete or secure the transaction—as fast as sending an email—and without fees! The value of blockchain potential is immeasurable but is not yet widely appreciated because communications promoting it are not being created by communication designers. The conversation we need to have is not if blockchain will be the next big thing, but that the barrier between this amazing tech and its broader usage is the lack of clear communications about its potential. Right now, people don’t understand it and henceforth don’t trust it. A clear understanding will foster its potential appreciation and wider usage.

To further the analogy between the growth and impact of blockchain and cars, Neha Narula, stated in her TED talk The Future of Money: “Like the first automobile, the first generation of blockchains are a little too slow and a little too cumbersome. Back then, neighbors would call you crazy for buying a large, loud machine that catches on fire and is still slower than a horse.” We all know how that story turned out, what we were once afraid of we now cannot imagine our world without. Expect the same with the future generations of smart contracts. 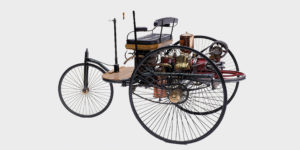 A Technology for We the People

Our national interests are also at stake here. Recent testimony revealed foreign tampering with our election process, calling into question the depth and duration of this activity, whether domestic assets were involved—or not—and where the trail of money leads.

We remember the “hanging chad” debacle of George W Bush’s first election, where a poorly designed ballot and collection process led voters to choose candidates they did not intend. Still today, America continues to resist any kind of online voting system. Critics point to the significant hacks of government systems as a reason not to embrace digital votes. The risk that someone could manipulate an election with no one ever the wiser is simply too high with our current use of digital assets and the Internet. But, a smart contract on blockchain technology preserves and syncs ledger entries, making the transaction immutable.

There may be an opportunity to develop a transparent system that tracks and displays all this information, but if no one knows about it, how will the world fight for and demand access to it? If we, as designers and communicators, can help clarify the potential of this technology in a way that makes sense to non-tech, everyday folks, they might weave it into their expectations when they go to make decisions about what their representative should be offering them. Voting reform is not widely fought for, because people cannot dream up a solution, based on their current understanding of what is possible. Let’s change that.

No one is saying that these uses for blockchain are around the corner. The technology still needs more development before it can be applied to things ranging from opening a music file without delays, to a trustless voting system. The basics are there, though, and so is the desire. We want our music, money, and communications to happen at the touch of a button, and that’s created problems for developers tasked with securing those systems. The ability to introduce unique assets—digital properties that no one can copy and which can belong entirely to you—will fundamentally transform our relationship with information… and with each other.

I propose we, as communicators and designers, dive in and decipher the meaning into a beautiful and clear path to understanding. This is our area of expertise after all. I intend to follow up this post with a series of clear and intuitive infographics aimed at explaining how this technology works and to identify the now-available solutions we have all been reaching for in our daily lives.

Design is a team sport From science fiction to design. Branding isn’t just a logo… But here are a few good ones. Mind The Gap