Tom Peters is not a man. Tom Peters is a movement masquerading as a man. And Excellence Now: Extreme Humanism is the manifesto for this movement.

Of course, Tom Peters is a man. In fact, he is an author who, along with Bob Waterman, wrote one of the greatest business books of all time entitled In Search of Excellence. The story of that book’s genesis has been told many times, including by Tom himself. Fresh out of Stanford B-School and a lowly McKinsey intern, Tom is sent with Bob, his partner in crime, to study excellence in business. He goes to the ballet and sees excellence in action. He decides on the spot that business excellence should work the same way—everyone moving together in the service of one big idea, deeply connected by a common goal, with each individual being honored and valued for the quality of his/her contribution. The end result is a triumph of their collaboration. After 43 years later, with 18 books, more than 125,000 tweets, hundreds of speeches in 63 countries and every state in the US, and dozens of podcasts, Tom decides that since the world of business hasn’t been listening at the scale he had hoped, he will try again. One. More. Time. And being Tom, his words quickly outgrow the confines of just one book. (See infographic.) 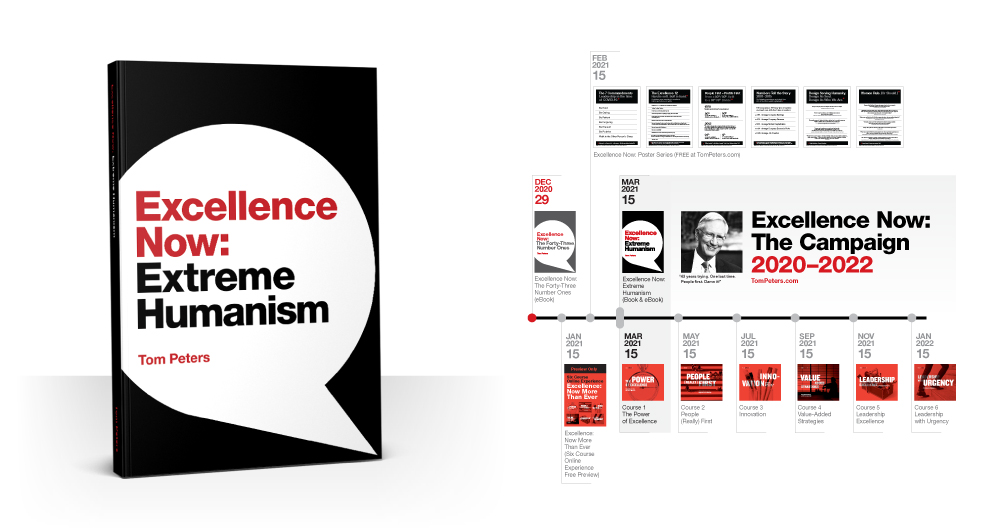 Flashback: The first time I saw Tom in action was about 1986. I was the president of the Aspen Design Conference and Tom spoke. He was, as I later learned, his usual passionate and prickly self. I was mesmerized by both his energy and his ideas.

Back to 2020. The coronavirus is raging, and Tom has written his final book. My friend Julie Anixter has recommended D/G—me and one of our Creative Directors, Stuart Lopez—to work with Tom on the design of the book. I will never be able to think about these months of hunkering down and watching the world succumb to illness, politics, racist upheaval, outrage over inequity, and even insurrection, without hearing Tom’s rant in my ears. Yes, the book was written before COVID, but it has become even more timely, even more relevant, and even more necessary. As the social order has evaporated around us and reconstituted itself into a Biden/Harris presidency, many are calling for a moral, ethical, and social equity lens on all manners of human activity. And, it must be said, they are doing so with a deep and widely held fear that civility might belong to our past and not our future.

Design is a team sport Michael Donovan and Nancye Green 2014 AIGA medalists. How a vision becomes an icon Light as a metaphor for Corning’s transformation