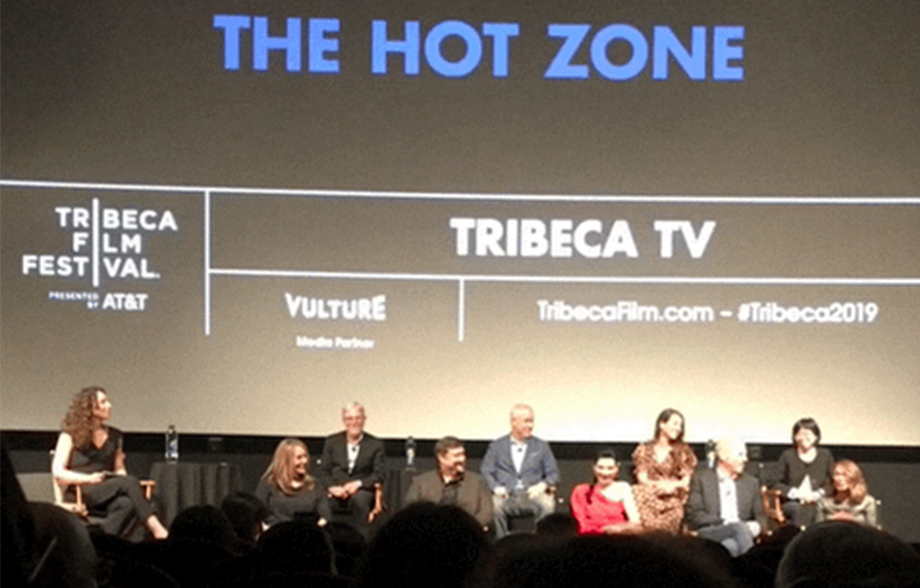 I went on the Board of Directors of EcoHealth Alliance about 12 years ago, which fueled my own interest in viruses. EcoHealth Alliance scientists track viruses all over the world and can take credit for finding the sources of SARS, MERS, Nipah virus and most recently, Ebola (in a species of bats in Liberia). Today I am chair of this board and, in that capacity, was involved in choosing Lynda Obst to be our gala honoree on May 16 of this year.

Which brings me to The Hot Zone, a television series which aired its first two segments at the Tribeca Film Festival last night. Over two decades in the making, Lynda Obst persisted in getting it to the screen, and she said last night, in the golden age of television, this content thrives in its limited series format, drawing out its compelling content, delivering both information and entertainment – if you don’t mind being kept on the edge of your seat. Starring Juliana Margulies and Noah Emmerich, based on the best-selling novel by Richard Preston, it is well written, acted and directed, illuminating and terrifyingly relevant.

While Lynda was getting her movie to screen, I was working on various projects which addressed the issues of population health – especially heart health and health issues which are exacerbated by unfortunate genetics, bad habits and lack of access to quality healthcare. There is something particularly unnerving about these predator viruses. Don’t get me wrong. They are fascinating foes worthy of respect. Like meteors, which can strike seemingly from nowhere, they emerge jumping, seemingly out of nowhere, from their animal hosts to us and we are then one airplane flight away from a major annihilating global pandemic. (I am liberally paraphrasing Peter Daszak, President of EcoHealth Alliance.)

And yet, they are discoverable early with vigilance. They are preventable through a series of smart practices including conservation and establishing measures like stopping the ingestion of bush meat. It turns out, that Ebola victims, the few there have been in the US, have survived, while those in poor host countries have died in huge percentages. Where you live matters and how much money thrown at the problem matters. In the US, the last Ebola scare cost our country $5 billion for just three cases. Yet we haven’t taken the threat seriously. We also haven’t been too worried about comets, which I heard this morning are actually a very real danger to our planet or melting glaciers – well you get the point.

I suppose ignorance is bliss, but this book and this television series from NatGeo might make our sleep a bit less blissful.